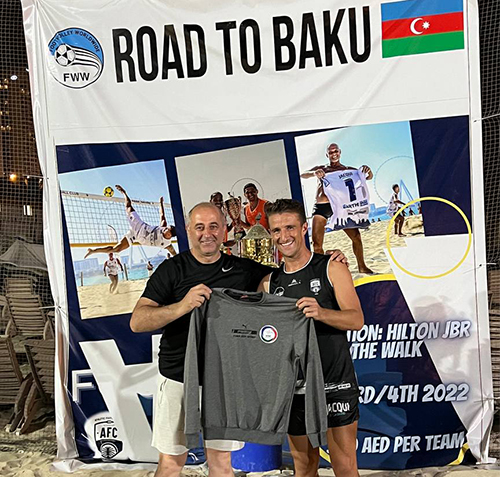 The next qualifying round of the World Footvolley  Championship in the United Arab Emirates has ended.

The Danish team consisting of Kiko and Fabio was the strongest in the competition.

The UAE and Italy won silver and bronze medals, respectively, on Dubai Beach.

Secretary General of the International Footvolley Federation Afgan Hamzayev, who officiated the tournament and participated in the awards ceremony, presented the uniform, which is a special gift of the organization, to the President of the local federation Kevin Deneker. Thanking him for the excellent organization, Hamzayev said that in the future there is a basis for holding more prestigious tournaments in Dubai.

Angelo Paradiso, a former player Lazio who played for the Italian club Lazio, said he loved footvolley and trained tirelessly. He said that this sport is not only a miracle, but also brings together old friends. Paradiso said that he gladly participated in the tournament and did not have enough experience to win. Angelo also expressed his desire to participate in all tournaments under the auspices of the International Footvolley Federation.

It should be noted that the next qualifying round of the World Cup will be held on June 17-20 in Batumi, Georgia.

The Danish national team is coming to Baku